History, natural landscape, adventure, community. No matter what you want to see, there are a lot of must-do attractions across the Gilgandra region.

Located only 200 metres from the CBD, wander down and grab a coffee or picnic to enjoy in the park.

Be sure to also pop into the nearby boutiques and see what Gilgandra has to offer! 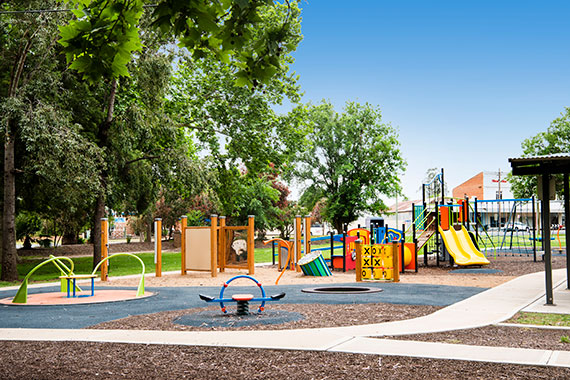 The History of Hunter Park

There was a sawmill located in this area before it became a dedicated park area. The sawmill was on the site of the present Gilgandra Swimming Pool.

The park was taken over by the Gilgandra Shire Council in August 1909 through the then Minister of Lands. 'Being the whole of the block of land on the Eastern side of the Post Office and the street separating that park, included in the park'. It was then named The Gilgandra Park.

By the end of 1916 the Shire Council had gates erected 'large enough to allow the access of perambulators'.

In the early 1910s the park boasted a children's playground, later the first bowling green and clubhouse.

Late in 1939 the Gilgandra Swimming Pool was established, then the Bowlers' Clubhouse became the first preschool, (later taken to Court Street), the children's playground was updated and excellent lighting has been provided throughout the park.

The Gilgandra Weekly printed 'The local park is an absolute credit to the head gardener Mr Theo Harvey and the park manager Mr John Hunter'.

A Gilgandra Weekly clipping taken from a Sydney paper: 'Gilgandra Park awarded first place in the 1964 Garden Competition for the North West Zone of the State'.

After Mr John Hunter's return from the war, the park was renamed Hunter Park in honour of his role in its beautification and his outstanding commitment to the position of Council Engineer.

In the year 2000 volunteers,  youth workers and Council erected a SKS skate facility for Gilgandra's youth near the Newell Highway and Swimming Pool.

View cart
Back to top